Can I just put out here that I ABSOLUTELY LOVE THIS THREAD!!!

Thank you so much for this compilation of delightful tips and tricks. Every time I stop in here, I learn something fun, helpful, or revolutionary.

ARG!! Where do I put my executable???

Asking your distro’s opinion… $PATH contains a : deliminated string of each directory that’s checked for executables and the directory names reveal if they’re managed and who they’re intended for.

Keep in mind every distro/system can be different though the terminology is often shared, this example is for Fedora:

If I attempt to run xcalc (the calculator 99.99% of Linux users are surprised to learn they have installed), the system will check the current directory, then those 6 directories from top to bottom till it finds xcalc and runs it.

Should I uninstall xcalc?
That’s a philiosophical question beyond the scope of this guide.

Everyone describes these directories a bit differently but this is my practical summary:

File & folder permissions ultimately determine who has access to what, for example if I chmod +x instead of chmod u+x a file in my user folder, all users will be able to execute it but the above is a decent guide to what these folders are generally intended for.

Where should I put my executable?

Because /local/bin directories are checked prior to their /bin equivalents it makes it easy to run a script first that then runs the program being asked for.

Should I uninstall xcalc?
That’s a philiosophical question beyond the scope of this guide.

Some examples of PCRE RegEx with inline Perl:

The definitive guide to, “Where the hell do I put this?” and, “Why the hell is this put here?”

pkgs.org is a distro search engine for packages!

Without the --no-symkey-cache argument above, passwords are cached by the gpg-agent allowing decryption of those files without a password until the user logs out.

To remove all cached passwords without having to logout, use the following command:

Why the name change?

It makes more sense and I think I never really posted something on Tuesday either.

Every day should be a terminal day.

POSIX Shell doesn’t have arrays but it does have “an array”… kind of.

You can use the tools for managing arguments in semi-familiar ways to how arrays are managed in BASH. Each function has it’s own arguments too so each one has it’s own “array”.

Running an app as a different user in the same X session:

Useful for running apps in different configurations if they don’t support profiles (which Firefox does) and sending notify-send alerts from scripts run with sudo, ex:

“The difference between the commands runuser and su is that runuser does not ask for a password (because it may be executed by the root user only) and it uses a different PAM configuration. The command runuser does not have to be installed with set-user-ID permissions.”

So what about the other LEDs?? This command will turn them all on…

* It turns out most distros consider Caps Lock and Num Lock LEDs forbidden fruit and for good reason. Below is a guide to allow you to use them but (at least on my machine) they reliably produce unpredictable keyboard results such as the Enter key being held down, Shift being held down, being totally locked out of the numlock keys and sometimes all of these behaviors stick around even after the LEDs are turned off.

Scroll lock appears to be the only “safe” LED compared to the fore-mentioned. Caps Lock is usually ok and Num Lock opens the door to the chaos dimension.

Does anyone know of a way to send keystrokes to an X window? Other than…

This may not be exactly what you’re looking for but…

I know a program called “crikey” 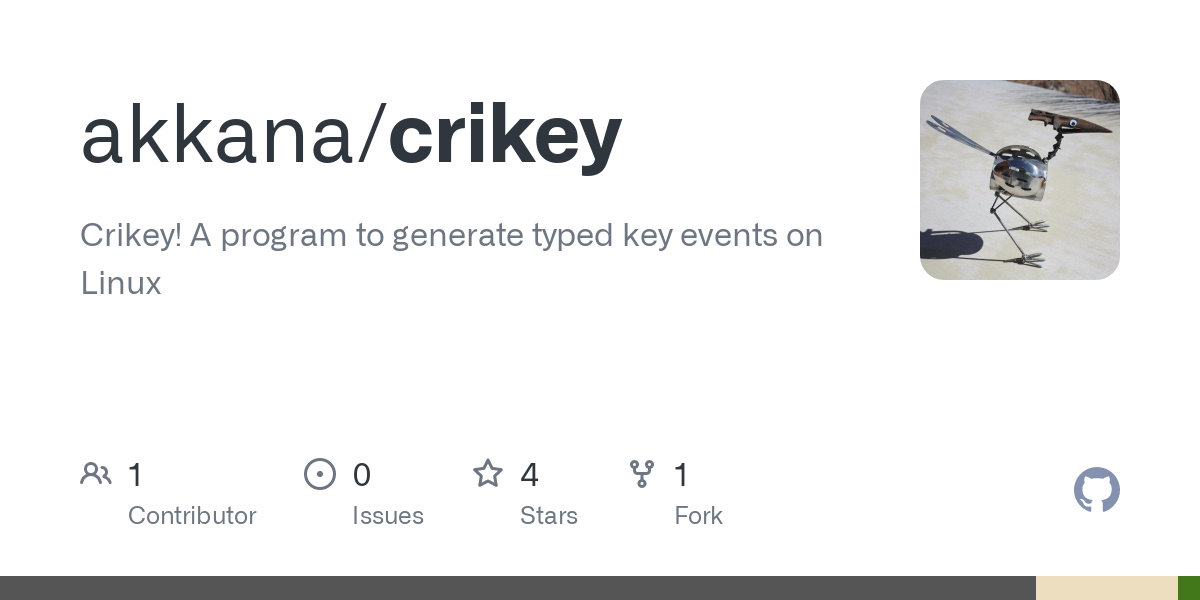 It’s used for outputting a string with a hotkey wherever the cursor is. You can pipe stuff into it as well.
Example:
echo "hello" | crikey -i -s 2

This will print “hello” after two seconds to the active window. I use this with zbarcam to get raw barcode data from a webcam and type it into a database form input.

That’s a good tool to know about.

Ironically one of the things that makes it so cool (handling of special codes) makes it not work for my project although getting more options was sort of a quest for a silver bullet anyway and that’s quickly been turning into the realization I need to do a lot of custom handling to make this work.

I’ve been putting off the description because It’s solvable with a single line of code unless I start describing the 1,000 edge cases :P. I’ll post it soon.

Only 28 lines to start an X Session from TTY

sx is a replacement for startx and xinit which i’m currently using to start XFCE.

sx is a tiny fraction of the size of startx and xinit showing what cutting a few features and edge cases can do for making code easy to read and hack on.

Note: I boot to a TTY but If you’re using a Desktop Manager like LightDM you’ll need to configure it to use sx. Alternatively you can switch to a TTY and start an additional X Session using sx as it uses the TTY you’re in not TTY7.

Alternatively you can use curl

wttr.in is a Web API wrapper for delivering output from the included wego project. Check out the projects below:

wttr.in (wego as a web service) 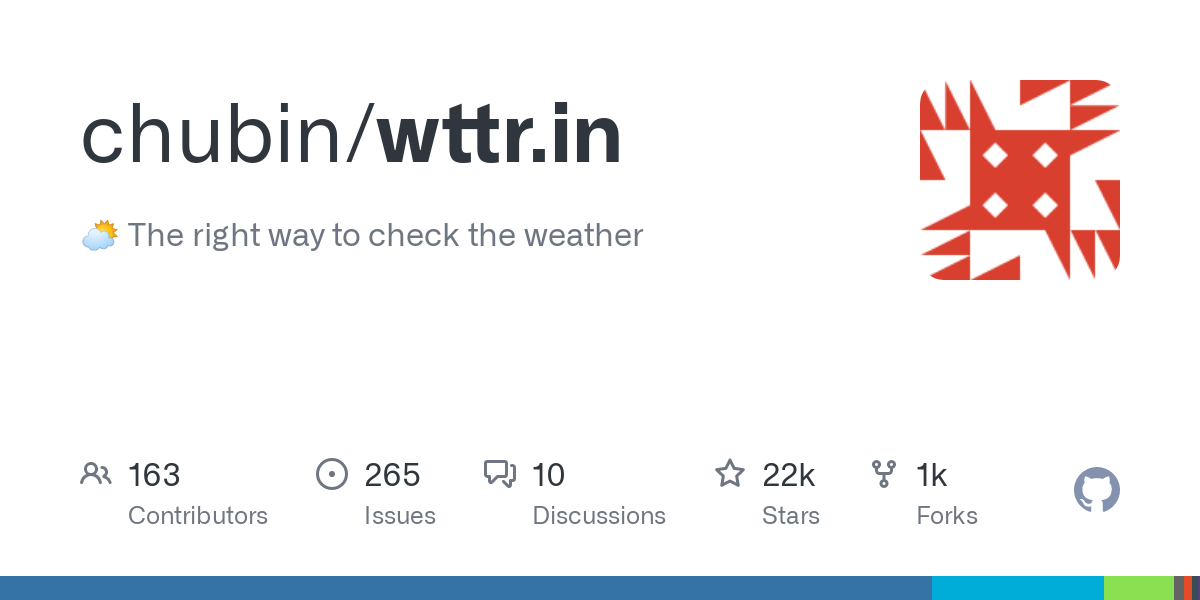 GitHub - chubin/wttr.in: The right way to check the weather

:partly_sunny: The right way to check the weather. Contribute to chubin/wttr.in development by creating an account on GitHub. 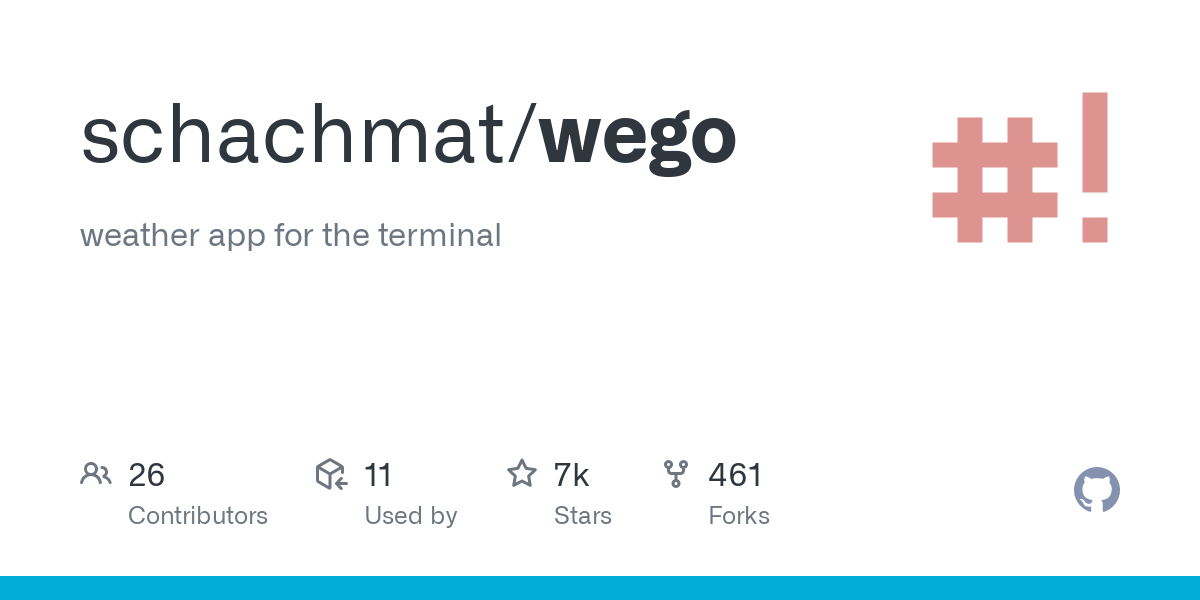 weather app for the terminal. Contribute to schachmat/wego development by creating an account on GitHub.

I set up with a systemd user service with a shell script using wttr.in, to populate the weather in swaybar originally. wttr.in is pretty neat.

I love this thread!

Note: This guide is for xfce4-terminal, mate-terminal and gnome-terminal though it may work on others. It doesn’t work in konsole (info) or alacritty, these will likely need something like a wmctrl or xdotool solution.

Instructions at the bottom for how to make this work in xterm.

A quick n’ dirty solution to set 125 columns without adjusting the rows would be:

…though a more elegant solution would only change the rows if they were too small and be easier to read:

Making this work in XTerm

XTerm needs allowWindowOps set to true for this to work. At startup your distro will run something similar too xrdb < ~/.Xresources, xrdb < ~/.Xdefaults or neither. If it’s neither one of these need to be added to startup.

For this example i’m using ~/.Xresources