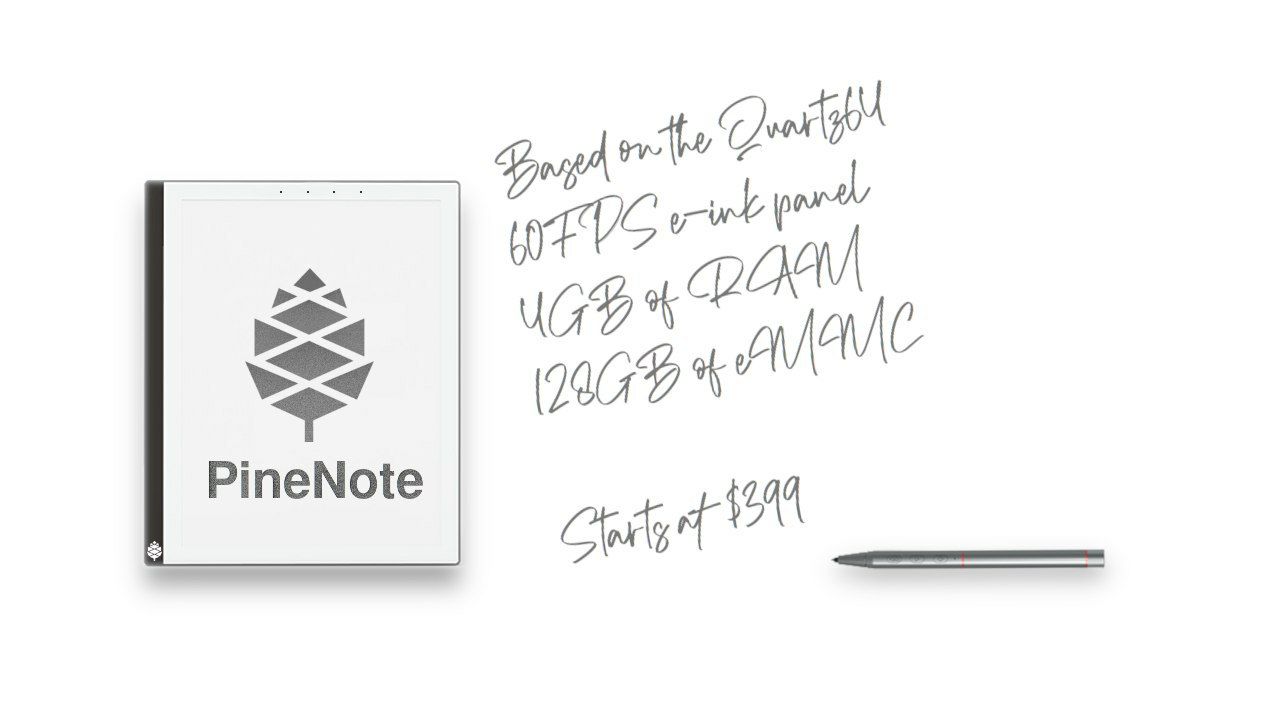 When it comes to getting premium privacy-focused e-ink devices in the hardware ecosystem there are few reputable choices. As the host of Hardware Addicts podcast where we cover the latest hardware technologies, there is a clear lack of solutions...

I love what Pine64 is doing, but I really need them to concentrate on a 100% complete Pinephone!

I think most of it is the community operating systems which they don’t have control over but they do donate a portion of sales toward getting that sorted.

That isn’t to say the hardware’s perfect… for example my Pinephone only charges if the USB-C is the “correct” way up and while it’ll refuse to charge a battery that’s too low it also won’t turn the phone off to prevent it from deeply discharging. On the update notes I haven’t seen those things addressed so it’d be nice to see those fixed.

I know. I’m just wishing for a fully functioning Linux phone which I can use fully. Ah, the dream is so close to being reality.

I love what Pine64 is doing, but I really need them to concentrate on a 100% complete Pinephone!

That isn’t to say the hardware’s perfect… for example my Pinephone only charges if the USB-C is the “correct” way up and while it’ll refuse to charge a battery that’s too low it also won’t turn the phone off to prevent it from deeply discharging. On the update notes I haven’t seen those things addressed so it’d be nice to see those fixed.

Just to clarify a few things. The PinePhone hardware has not been changed/updated in about a year. Because there’s not really anything else to fix.

What you guys are describing are software issues. Kernel bugs and such. Pine64 does not develop any software, but depend on the community to bring the software. They just bring the hardware.

So the state of the PinePhone, is basically a showcase of the state of Open Source Mobile software, developed by developers in their free time (mostly).

What you guys are describing are software issues.

Prior to my Pinephone being turned on, it doesn’t recognize USB-C is connected till it’s the “right way up”. That’s using several different Anker USB-C cords with several different power adapters including one from Pine64 and they work both ways with my regular phone. This problem is the same over ~6+ OSs i’ve tried over multiple versions though if the hardware can’t see it I don’t think there’s much hope for the software.

Every Android phone i’ve owned had discharge protection built into it’s firmware (at least from my observation of how it prevents boot unless there’s X charge). The capability is there as the PinePhone prevents charging on deep discharge but ironically it won’t prevent that happening in the first place.

Deep discharge protection can be done in software too but i’m not sure how tricky it’d be for the Pinephone. To save power Pinephone OS’s practically put the phone to sleep when the screen is off and SXMO for example has a feature that wakes it up intermittently to check SMS. I’m not sure how difficult that makes implementing a power check while it’s “sleeping” in a way that doesn’t reduce battery life.

A simple sticker on my USB-C solves the “upright” issue though that deep discharge is a real pain unless I keep the screen permanently on and chron a power check every minute.

It’s a dev device and when it’s fixed I can just upgrade the part which is awesome but i’m not sure if i’d call it finished.

it doesn’t recognize USB-C is connected till it’s the “right way up”.

My PinePhone recognize the charger either way the USB-C plug is turned.
If you are talking about the dock not being detected, that’s a software issue (kernel to be exact). And since no kernel has gotten that right, it does not matter which OS you install (unless it’s android).

I’m not sure what you mean about the deep discharge protection. Is it a hardware component that does that?
If it’s not, then it’s controlled by software, either firmware, kernel or userspace. Which are all done by volunteers.

It’s a dev device and when it’s fixed I can just upgrade the part which is awesome but i’m not sure if i’d call it finished.

Yeah. I’m just saying. As the hardware has not seen any revisions in over a year, Pine64 probably sees it as hardware complete.

Kernel, firmware and userspace support is still not ready. I agree with you there.

My PinePhone recognize the charger either way the USB-C plug is turned.
If you are talking about the dock not being detected

Which motherboard version are you running?

Both data and power only work one-side up.

Which motherboard version are you running?

I have been testing on my UBports CE (rev 1.2) and my Manjaro CE (rev 1.2b which is the latest revision).

Well, @Strit, I did understand that. But I still maintain that Pine64 needs to concentrate on a complete Pinephone (working with software developers). Something is is amiss when we can get someone to backward engineer an Apple M1 for Linux use (very soon), but we can’t get a fully functioning Linux phone that can be presented to the world for standard use.

Okay. Since you brought up the Apple M1, lets talk about the differences between the two.

Sure, they are both “new hardware”, but the phone requires a completely new ecosystem.
Modem software, native mobile apps on both the GTK and QT side, Dialer and Messaging. All on top of the drivers (which are pretty much complete).

What the M1 requires to work are different. It requires a kernel Device Tree (which is in heavy development right now by multiple companies) and drivers for it’s hardware, which has just recently started seeing development in the form of GPU and PCIe drivers.

Kernel device trees and drivers have often been fairly quickly done, for any device, that has gotten attention from kernel developers. Which the M1 certainly have, ever since it was announced.

Creating an entire eco system, as with all user space software in Linux, takes time because it’s all done by volunteers. It’s done by very few developers in general, compared to the many that works on the M1 kernel stuff.

Making an open source stack work perfectly together with a very closed black box (the modem) is no easy task. It takes a long time, when the developers for it are volunteers.

Don’t get me wrong. I also think that we should have had this down by now, but I do understand why we don’t.

The PinePhone is functional. It has bugs, yes. But it’s functional. You can make and receive calls, send and receive texts, use mobile data and listen to podcasts/music on the go. That’s the basic functionality. It has bugs. Yes. The phone is listed as a device for Linux enthusiasts. Not for every day consumers. Pine64 has never claimed it was a device ready for mainstream adoption, so don’t pretend like it needs to do everything your Android/iOS phone does, because they have a good 15 year head start.

PS: Sorry for the off-topic. This PinePhone discussion should probably be moved to a separate thread.

@Strit
Thank you for the information on both products. My frustration is not with the wonderful volunteers that do the great work that they do. It has more to do with being on the verge of having a fully functioning Linux phone with software that does what it is suppose to do and not being patient enough. Sorry for being so gruff for a moment there. I do appreciate what you and others do for Linux as a whole. I truly wish Linux, in all areas, was not so fragmented. Alas, that is what makes Linux so fun also, the variety.

Also, yeah, it probably should have been on another thread, but it was what it was. Thanks again for the information.