I’ve just about reached the end of rope with Linux on the desktop. No matter what distribution I try, it breaks after a couple of months at the most. Yesterday my LMDE drive stopped booting. Rolling back to the previous kernel didn’t help. Trying to restore using TimeShift didn’t help. Updating the bios and firmware from a Windows 10 SSD didn’t help. Linux just doesn’t like this hardware for whatever reason. I need an OS that isn’t going to break or freeze, but will just keep on running for years to come. Linux isn’t it on this hardware.

I’ve never had much luck on Manjaro either. But I usually don’t delay updates.

The motherboard is a Corsair Hero 6. The cpu is AMD Ryzen 2700X. The gpu is a RTX 570. Corsair DDR for memory. It’s all AMD compatible hardware. No idea what the problem is.

Just connected the LMDE SSD to the laptop to see if it would boot. And the boot wouldn’t complete. It would go to grub and then to the initial LMDE splash screen but would not load the decrypt login screen. It was doing the same thing it was doing in the desktop. For additional information about two months ago I had the same problem in the LMDE drive wouldn’t completely boot. But then about 3 weeks ago I was about to intall Qubes on that drive but it started booting again until yesterday morning.

Do you mean the Crosshair 6 Hero? I don’t think Corsair produces motherboards.

Linux Mint Debian Edition? I’ve never trusted that distro to be stable to even want to try it once. Why not Linux Mint Cinnamon, where by far, the most bug-fixing efforts are being concentrated, making for the smoothest experience, owing to it’s vastly greater popularity? Popularity in a Linux distro really buys you something, which is my point here.

I use MX Linux, which is number one there. It has a few rough edges, but it “goes the distance” for me. I seek speed, longevity and popularity, when I choose a distro, and the desktop merely needs to be sensible, and not be annoying or get in my way (and I don’t go for “sexiness”, as that’s something I can live without).

Having too idealistic a demand for philosophical purity in a linux distro will heavily tax you, when one strays too far from the mainstream distros, into what I call “death by 1000 papercuts land”, which is where you seem to be.

My philosophy is to never stray out of the top 10 most popular distros as listed on distrowatch.com.

Erm, you know that Distrowatch is not a good metric of popularity, right? I mean, the top ten distros on it are among some of the most popular ones, but it only measures hits on that distro’s page on Distrowatch, not their official website, in search results, or any metric that doesn’t just measure distrohoppers looking at the newest releases. I can say definitively that MX is not more popular than Ubuntu.

What’s the model of your LMDE SSD? I think you should run some tests on it because I’m wondering if there’s some hardware failure on it.

I’m pretty sure DistroWatch is pretty accurate, because I just checked and MY FAVORITE distro is listed near the top.

Don’t believe me? check it out!

I mean, I personally think it’s not high enough! Pop!_OS is my third-choice distro. 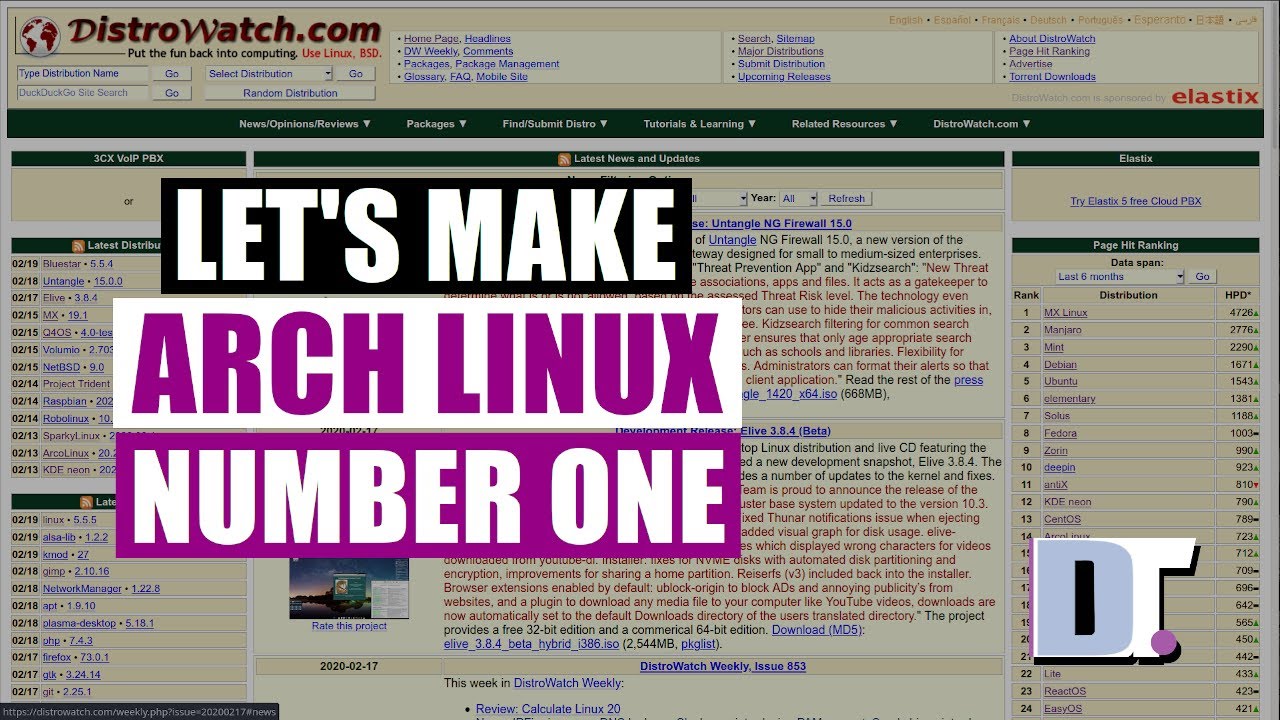 DistroWatch Is Manipulating You, So Let's Fix The Rankings!

DistroWatch ranking suck. They don't actually measure Linux popularity but DistroWatch doesn't mind if people mistakenly think so. After all, having a ranking based on page hits to their site....wel...

Here’s an amusing video. I participated in the prank, and although it didn’t quite succeed, it was fun.

If I were you, I would try MX Linux. They seem to have great hardware compatibility. Although it is Debian based so it may have the same issues as you are having with LMDE. I would also try openSUSE, first Leap as it is a static release. If you like the rolling, try Tumbleweed. I have an Intel / AMD and an AMD / AMD system that seems to work real well with Tumbleweed. My Nvidia systems seem to work better with Leap.

I am wondering if you have some kind of hardware failure, actually. Some distros have a hardware test thing you can run before you install it. I know that MX does and I am pretty sure that openSUSE does too but I’m not sure as I haven’t run it recently.

This booting issue can happen if you remove drives from your computer without updating the fstab, I’ve also seen this happen when reformatting a partition, when multi booting for example to install a second or third OS, GRUB will panick if it isn’t updated correctly and suddenly the bootable options are not the same.

Both of these have occurred on Linux Mint in my case.

You can boot from a usb drive and use the disks utility to run some tests on the drive though. That would be a start. Other than that, we only know enough to speculate.

When it fails to boot do you end up in a terminal or shell at all?

Since the problem persists when connected to your laptop I’m going to say it’s either the drive itself or something has happened to the install, like the fstab or GRUB problems I mentioned before.

The windows SSD did boot fine no problems though. @haroldcrews says he booted from it to install new drivers for the mobo but that didn’t fix the LMDE boot issue.

If I’m understanding this correctly, the only issues occur with this one drive with LMDE on it.

Distrowatch is not a good metric

I’ve heard this before, is there a better centralized source for judging “real” popularity or is this the best we have for now?

If you want to throw a hammer at the problem you’d want Debian Stable. I’ve been on it for years through multiple hardware setups and as you might expect it just never ever breaks.

If you need newer software you can use Flatpacks, backports, Snaps or just run it in a VM like LXC or KVM.

I’m transitioning to Debian Testing but haven’t had enough experience to fully recommend it. I’ve run it for 6 months in the past without a hitch but give me a few years and i’ll shoot you a recommendation.

It sounds like it might be a hardware / driver compatibility. LMDE uses Debian 10 I think and Debian 10 has Linux 4.19. I don’t remember which kernel support for the latest AMD came it but that totally could be the issue as well as which Mesa version is being used.

I have a AMD 2700X and my experience has been amazing with it. It is supported on everything I have tried though I only try stuff with Linux 5.0 or higher to guarantee it will have a chance to be supported.

My GPU and Motherboard are different so it could be the exact cobination you have but I’ve heard the 570 having great support as well. The motherboard is the only thing I am not familiar with as today was the first time I heard of the ROG CROSSHAIR VI HERO

It’s not a distro issue. All distros I’ve tried have had the same problem.

I’ve tried MXLinux a couple of times and it always has the same problem. It would break and stop booting.

No, it happens on all drives eventually whether SSD or nvme.