This week’s episode of Destination Linux, we're going to be guiding you to the best alternatives to all of the Adobe Creative Cloud tools. Then we wil... 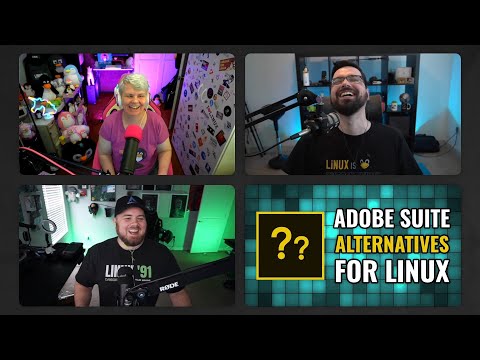 This is great and important so it’s a good thing to see but this is a less important feature in the scope of professionals. The Non-Destructive Workflow is the most important piece missing from GIMP before Focused Professionals will consider it. I know they are working on this part as well to some degree and that’s great but until it happens, it’s not really even in the discussion.

I am new to the design space and I must say that it’s easier to learn adobe because of all the tutorials out there. I wish there were more tutorials on how to accomplish similar tasks on the FOSS solutions. I don’t do too much graphic design or photo editing, I am mainly talking about Blender as an After Effects substitute.

Here are some late thoughts after watching the episode entirely (OK not entirely…).

I agree that GIMP is fantastic, but lacks important features. I use GIMP since 13 years and longer. To me something else very important is missing for a general purpose image editing software: Easy to use tools to create shapes!! GIMP even understands vector data and stores them as Paths, so a vector shape tool could be implemented with Paths in the background.

And something that isn’t mentioned that often, but I think is very cool in Photoshop (never used it, just read about it), is the ability to quickly and easily record and playback macros. This can help to create quickly some time saving actions and replay them whenever needed, without programming or time consuming testing. Is that still a thing in Photoshop? Last time I used Photoshop was in mid 2000s on a cracked Windows XP a cracked Photoshop…

On a different note, 2 years ago I used Scribus to create a 66 pages long classic magazine like digital document. The software is extremely powerful and impressive. As you guys say, it is on the same level as Inkscape in my opinion. I never used such a tool before and was able to create a “relative” professional looking magazine.

… and I just read a news that AMD GPU support is added for Blender on Linux. I think this would interest Ryan: Blender 3.2 Debuts With AMD GPU Linux Rendering Support - Phoronix

I loved the segment on the thoughts of stickers. I have stickers on my laptop lid. Scribus is nice to have and great but FLOSS options require patience and dedication compared to the proprietary tools. David Revoy, the artist behind Pepper and Carrot webcomic outlined his difficulties putting a graphic novel to press using entirely Free Libre and Open Source software. It takes a lot of manual interventions but he eventually succeeded.

So, the Cider recomendation… FrIgGIn AmAzInG!!! As an iphone user, for reasons, it’s great to have an option on my desktop machine. thanks for the recommendation!!!

Cider has been causing weird issues for me (flatpak on Fedora Kinoite Rawhide) but it has been fantastic when it works.

As an iphone user, for reasons

You like having a cohesive mobile OS with apps that don’t feel like they’re afterthought ports from iOS apps?

You like having a cohesive mobile OS with apps that don’t feel like they’re afterthought ports from iOS apps?

Among other things, but, yeah that’s definitely a part of it.

I know the crew mentioned they didn’t want to create a repo or list of items but I started one for a different community I participate in and figured I’d share it here too in case people are interested or want to contribute. github repo

I made a list of every application we mentioned in the show notes page at https://tuxdigital.com/podcasts/destination-linux/dl-281/

Oh cool! I’ll add these when I get the chance!